On Nice Road, did a dry run with the bikes ahead of our ride to Coorg. Testing the Go Pro Hero 3. Circa2013. Soundtrack: Asleep at the Wheel/ The Cinematics 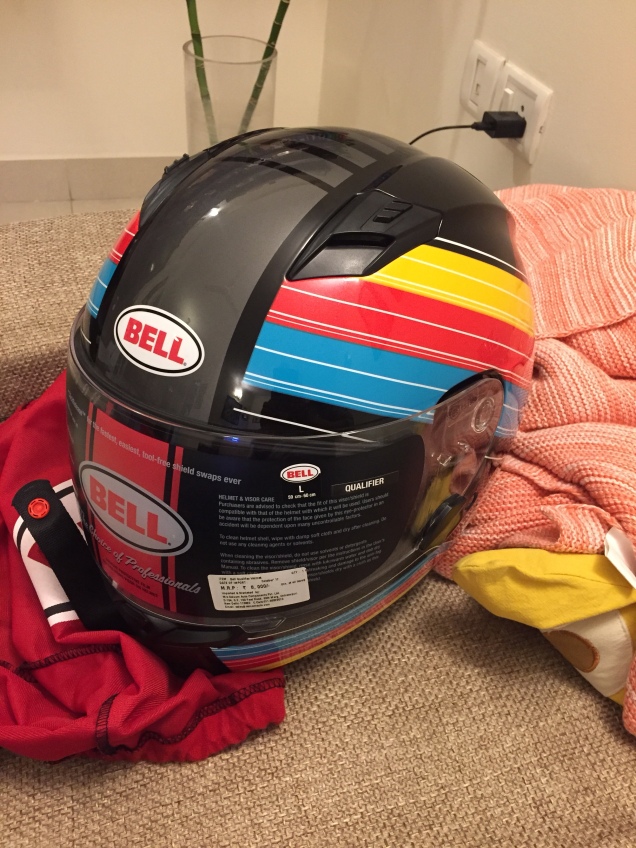 Got myself a brand new Bell Qualifyer helmet. Wifey and me just fell in love with the retro themed stripes. Already appreciating some of the finer detailing compared to the outgoing MT Axis, I have used for more than 2 years. Will poke in a review soon!

You know, how sometimes, a certain tool or machine or even a personal item, feels so much a part of your life, because its been around forever? Tried, tested and weathered over time, this object of affection has an enduring significance that’s part and parcel of your being? Well oddly enough, for me, one of these objects is a pair of utilitarian motorcycle luggage boxes.

The Studds Vault, is an unchanged design dating possibly back to 2002. I first used these on my Kawasaki Caliber Croma motorbike, way back in 2004.  In those days, all I had was a helmet, a pair of gloves and a backpack, in the name of riding gear. So these proved ideal for short weekend getaways. They were great for regular office days as well- I could stow away a fair sized water bottle and lunch box. Capable of taking on rigours of daily use- the simple construction and robust detailing made them road worthy for many years.

I got hooked onto motorcycling and long rides on my Kawasaki Croma- tripping around North India in the first few years of my professional life. The boxes were the perfect setup for hauling my meagre belongings. The photo above was of a day outing from Shimla to Hatu Peak beyond Narkanda, where on a shepherd’s trail, we got stuck because of melting snow.

My first machine after my return to India in 2010, was an Avenger 220. Intending to make this little cruiser little more functional, I stalked stores on JC road in Bangalore, until I was able to set up the bike like this. These were a good fit on the bike, along with the Givi top box. The machine got its fair share of attention, and I could pack enough for a two to three day tour.

So when the time came to consider some serious hard luggage for the Himalayan, I did not immediately think of the Studds Vault, as an option. After all, this is 2017. The Indian motorcycling scene has exploded. Almost every major manufacturer has the top of its product line selling here- from adventure tourers to sport tourers to cruisers. There’s no dearth of premium luggage options as well. The RE branded panniers for the Himalayan are expensive, German made, sturdy aluminium hard case ‘swallow it all’.

But I needed something smaller to cope with the monsoons. The Via Terra tail bag gets wet in a downpour. The Givi Top Box had been given away. I wanted luggage that could stay on the bike permanently, whether I’m touring or commuting. It should hold everything I carry on my regular commute, and supplement saddle bags and carrier tailbags when I’m on tour. Scrolling through my biking archives I came across the above photos. And remembered a pair of old friends.

More information on the product can be found here:

Some days after the incident with the rear carrier, a new issue reared its head. I first noticed it, a month ago, as a sudden drop in power, especially if I had to overtake someone/ something in a hurry. Revving the throttle with the clutch half pressed, generally sorted the issue- but there was a slight lag in the throttle response. In the days to follow, this lag became more pronounced. Initially I thought this was to do with a particular gear or speed that the bike was at, I later realised this occurred just when I had to cross 3000 Rpm on the tacho. I dilly dallied on getting the bike checked, as work and weekends were quite hectic. One morning, while climbing a flyover on Ring Road, I was also trying to overtake a cab. Revving the bike, to clear the 3000 rpm hurdle quickly, I darted past the 60kph mark as the throttle found its response. I carved in between two more cabs and a bus and came out of a thin zone to see brake lights shining brightly, 10 metres ahead of me. Now all this possibly happened in a few seconds, with traffic all round me barreling down the flyover at about 50kph. I braked hard, stopped short of the car’s fender and as the car moved, gunned the throttle to stop someone rear ending me. It was then that I realised that the engine had died..!

The bike had not stalled. I braked and the engine died.  This happened two more times in the following week. I decided then that I did not want any more life-affirming moments. An hour’s commute was turning into a dance with death! The time had come, for the machine to meet its…um, makers.

They kept the bike for a week. The guywhoknowsme, told me it will take time, that they will do a thorough check and resolve the issue. I went back after a week. And the bike was ready with three significant alterations.

Turns out that Royal Enfield is doing a silent REcall. I was told that certain chassis numbers had been identified for these critical parts updates within the warranty period. I was also told that post December 2016, all Himalayan’s are up to date and without issues. Good news then for prospective owners.

As for Shadowfax, well he is leaner, meaner, smoother and seems happier. I did not get a replacement for the carrier, but traded my GIVI box for a Viaterra Seaty tail-bag, which quite suits the bike. Don’t quite care for putting the carrier back on now, as the photos below will justify. 🙂

I have also installed a mobile charger (ChargePLUS from Resonate)- which I felt, was a big miss from the manufacturers on a bike like this. Lloyd from Bike Nation, HSR Layout was a big help here- he is one of the few who stock this great product and he replaced a faulty charger immediately and without any fuss. I have used the charger off and on while commuting- on my i-phone, the current seems to come in after a time lag of about 3-4 seconds but sure enough it charges continuously after that. The only thing I’m not a big fan of, is the lightning cable itself, which could have been slightly longer and better armoured. Otherwise, the rest of the product is very well engineered. More details here- 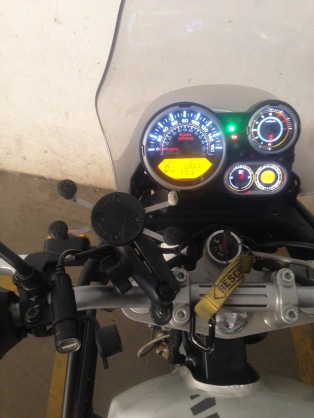 I rode the bike to-and-fro the workplace for a couple of days, after it came back from its makers. I had a hard time. You see, when you change half the engine, you are trying to run an engine with a multiple personality disorder. My understanding is that you have worn in, settled in parts and new parts which need to settle in. The initial few rides are best used to let the new parts settle in. Not so in crazy Bengaluru traffic! The bike heated up like an oven every 5 km, so I took one too many breaks watching traffic, breathing fumes and generally scrolling through the 5 apps on my phone like a zombie!

Which brings me to tomorrow. Sunday. I want to ride out. Out there in pure country, let the stallion run. Let it pace itself and find its rhythm. Let it come back refreshed and ready…to take me through next week’s grind!