The Royal Enfield Twins are here at a killer price. They have everything going for them- looks, good manners and grace. I’m sorely tempted! Makes me look at the Himalayan in a new light…will it stay or will it go? Now how do I lay me hands on some extra bit of cash, so I can have the best of both worlds? 🙄 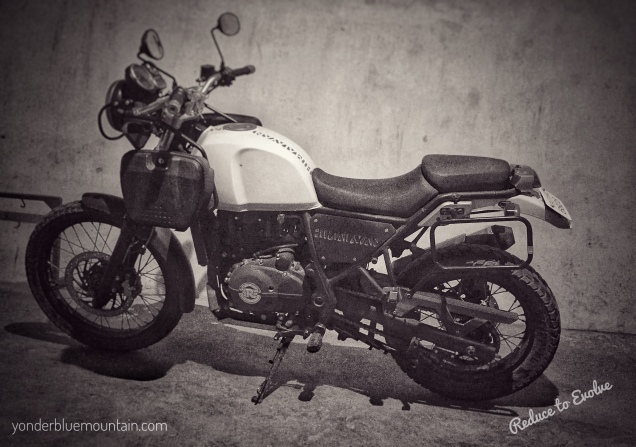 They are drop dead gorgeous. Just watched the launch at EICMA. The Interceptor (California Cool, in the words of CEO Siddharth Lal) and the Continental GT 650 promise to herald a new age of ‘easy and accessible, pure motorcycling fun’. Let’s see what the future holds… for now, I’m rubbing my hands in glee and me eyes are jest feastin’ on them beauties… har har!

More info to be found here

Thought I’d take the opportunity to talk about life with my two machines, while the joy of owning two motorcycles is still something I can call my own. That heart tugging decision to let the C5 go, has been taken, and I may have found a right nice guy who will take good care of it.

Perspective plays the strangest tricks. Couple of months ago, my entire riding interest and experience was focussed on the C5. Whether it was the daily commute to work or a weekend jaunt into the nearest woodland, the C5 was the centre of my appreciation, jeers, joys and disappointments. There were times when we were in absolute communion- man and machine in well timed harmony, that grunting British single on song. And then there were times, when you wondered just how you’d been tolerating this beast for 4 years- a broken clutch cable, a misfiring exhaust, lights not working, dead battery, pushing deadweight on a puncture, blown fuse, chain’s loose… you get the drift. And to top it all off- vibes. But then that’s the charm of this half litre royal singleton. And you get used to this dichotomy. Nothing is ever perfect for too long. And nothing bad lasts forever. I was once told -its not an ‘ownership’ with Royal Enfield, its a ‘relationship’. You get the good with the bad. And I  got used to it.

In walks that horse of a motorcycle. From the Royal Enfield stable no less.  Two days on the new machine and I realised that the level of sophistication on this brute was way past anything Royal Enfield has ever churned out before. First thing I notice- gone is that majestic thump. Second thing I notice- no vibes. None. This, clearly, is no ‘Bullet’. Nope, not even close. Now don’t get me wrong. I am no ‘Bullet’ worshipper. And I am no fan of that legendary ‘thump’. Nor do I believe that louder is better. In-fact I cannot understand folks who buy a Royal Enfield Bullet- Classic, Standard, T-bird, GT… whatever, and then fix that mega-phone exhaust to announce to the world that they have ‘arrived’. The roads would be much quieter without them, in my opinion, and the world, probably a better place. Besides, they kill their engines with those aftermarket boom boxes. I digress… Back to the Himalayan, then. On every commute, I am hard pressed to believe that I’m actually riding a thoroughly modern, bare bones moto that has been well engineered, and is capable of taking on almost anything you throw at it. There is an assurance of rock solid dependability on every ride, and from every department- the engine, the electronics, the suspension, the ergonomics, it all works! Surely, there’s been a mistake- how can this be a true Royal Enfield? Where is that endearing character? That promise of uncertainty? That lure of the unknown? It fails to show up. Repeatedly. I wouldn’t say that the machine is without niggles and issues- but most of them have been sorted out for me after the first service. And there’s character too- past the 600km mark on the odo, the exhaust now does some lovely pops and cackles when de-accelerating. There’s enough grunt to the throttle  and once you are used to it, you realise, this is a refined traffic carver.

I remember my first extended ride on the Himalayan. On the second night of ownership, I have a CBR250R for company and we are headed to the Airport for a cuppa. The Himalayan is a breeze to ride at 70kph. Its easy riding with the CBR- two cool runners- I think, this is nearly up there with the super smooth Honda. There’s dazzling instrumentation in front of me- ‘all systems are a go’. Speed, heading, RPM, temperature, fuel, time, trip distance- there’s a host of details. I’m cruising. The engine, after a few days of running in, is slightly more rev happy, and I’m having a ball. And standing on pegs is so damn easy..!

Some days on, I feel a pang. Something’s calling me… a quiet pull at my shirtsleeves, while I’m looking away, all in awe of this newbie. I finally notice it one day- that hulk of old, shiny black metal. Standing solemn next to the white horse. Counting its days with me. Waiting…

Two weeks of riding the Himalayan, and that pang has gotten intense. I’m used to the Himalayan now, I tell myself. I know how that corner feels. I know what speed to tackle that speed breaker at. But I’m asking myself, how was it on the C5? Do I still remember? My hands are aching for the feel of those handlebars. That vibey assault on the senses. Those days of hard cornering. That instant feedback…that guttural thump!